TLDR: OSU’s bargaining team continued to show disrespect for the collective bargaining process by showing up late, and they proceeded to offer a set of counter proposals which either failed to engage with the substance of our proposals or eroded employee rights under misleading pretenses. Read on for a summary of our last two sessions.

CGE returned to the bargaining table for the first session of the new term, prepared to negotiate a set of counter proposals and backed by another full room of graduate employees who made time in their schedules for the bargaining process. Only one thing was missing: 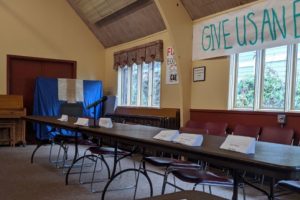 the OSU bargaining team! They arrived 30 minutes late and cited “administrative error” as the reason for their lateness.

With negotiations (at last!) under way for the Winter term, the parties negotiated the following proposals during the Jan. 17th and 22nd bargaining sessions:

In addition to the proposals that were passed, CGE members again brought powerful testimonies to both negotiation sessions explaining why we need a stronger contract. These testimonies covered a wide range of topics and pointedly expressed how OSU’s complacency on issues of inequitable workload, inadequate pay, unaffordable housing, and not providing security for DACA students and employees undermines our well-being. Graduate workers also decried OSU’s desire to weaken our ability to engage in actions of solidarity with other workers, their lack of interest in providing paid and family medical leave for graduate workers, and their disregard for our intersecting identities as students and as workers. An OSU undergraduate student also testified, stating that if their grades or graduation were delayed due to CGE going on strike for fair wages and benefits, they would blame OSU admin for treating graduate workers so poorly. Finally, a member of the Mid-Valley HealthCare Advocates (MVHCA) advocated for full healthcare coverage for all workers. CGE’s proposals and our members’ testimonies continually link back to our platform: Give Us An E.D. R.A.I.S.E. If you’re interested in sharing your personal story, you can submit testimony here and either share it yourself at a session or have someone read it anonymously on your behalf.

Our next session is on February 12 (Wednesday) from 1-4 PM at Westminster House. As usual, we’ll have hot lunch for all. Come for whatever amount of time you are able, and bring your friends and colleagues! Our theme for the session is affordable housing and childcare. Do you feel passionately about these issues, or do they affect you personally? Come share a testimony! After this session we just have two more sessions scheduled: February 26 from 1-4pm and March 11 1-4pm.