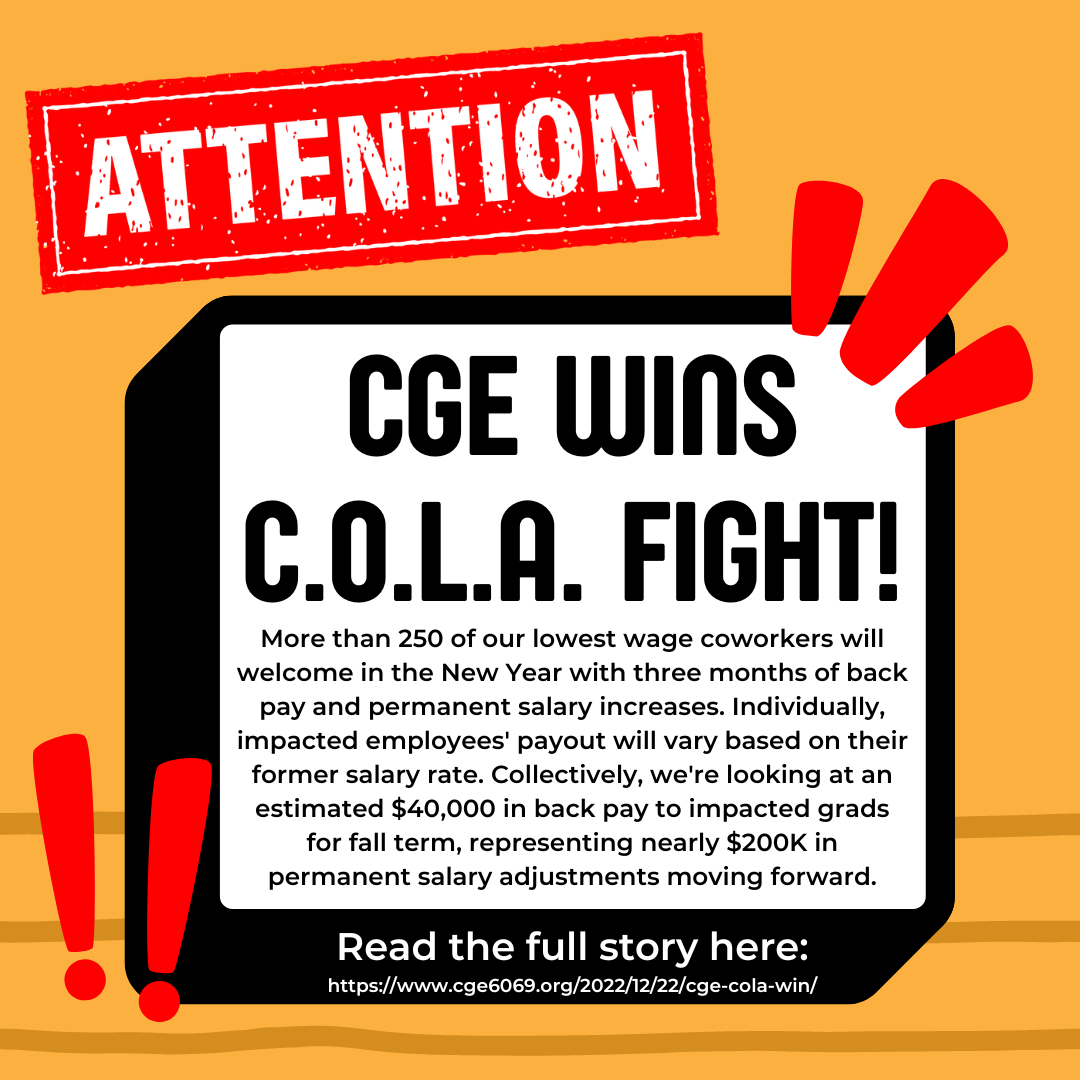 Quick Summary: More than 250 of OSU’s lowest paid graduate employees will welcome in the new year with a check from OSU, finally getting what they are owed from our most recent Collective Bargaining Agreement: An increase of 9% to the minimum salary rate, and an additional 4.75% increase for returning grads to account for cost of living increases. Impacted grads will receive back pay for the last three months OSU failed to pay up the full increases, and their salaries henceforth will be adjusted to meet our expectations from the bargaining table. The disputed amount varies from a few cents to over $100/month depending on the specific employee’s pay rate from the previous year – the lower the salary rate, the higher the adjustment. While we are still awaiting the complete report from OSU, CGE believes the three months of back pay amounts to a combined estimate of $40,000 in lost wages returned to affected grads. If you are an impacted grad, you should have received an email last week from ELR’s Heather Horn regarding salary repayment and adjustment expectations. If you believe you are impacted and have not received that information, or have a question regarding your situation, please email solidarity@cge6069.org with your question or concern, and a CGE staffer or Executive Council Officer will be in touch as soon as possible. Do note, we are on reduced work hours Dec 23- January 3rd.

The Full Story
Our member-led bargaining team of 11 grads from across campus had one primary goal at the bargaining table last year: raise the floor for our lowest wage and most precarious coworkers. Our team, with the support of more than 500 grads who turned out to bargaining sessions and rallies, fought at the table for over six months to secure the historic gains we made to Article 11 – Salary: namely, the 9% raise to the minimum beginning September 1, 2022, and the 4.75% raise for all returning grads beginning September 16, 2022. 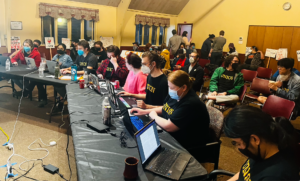 However, at the beginning of fall term we had stewards across multiple departments and colleges reach out concerned that new salary rates did not reflect what they witnessed us win in bargaining. When those same stewards reached out to their administrative units about the issue, they were told the decision to apply the raises backwards (i.e., apply the 4.75% first, and then bring folks up to the minimum) was a directive from HR – the very people who sat across the table from us when we made this agreement.

Knowing this would be a real fight, we filed a grievance on September 16th alleging violations of Article 11 – Salary, specifically around the sequencing of the raises. OSU responded by doubling down on their assertion that this was in fact how the raises should be applied, citing some of the most outrageous defenses we’ve ever seen.

On October 20th, we brought impacted grads together at our union hall to vote on whether or not we take the issue to the next step: Arbitration. Impacted grads voted unanimously to pursue the grievance and take it to arbitration. This decision was contingent on a group commitment to launch a pressure campaign on the ground with one goal: Get OSU to settle and pay grads what they’re owed as quickly as possible. Arbitration is a lengthy and expensive legal process, and our folks needed their money yesterday. 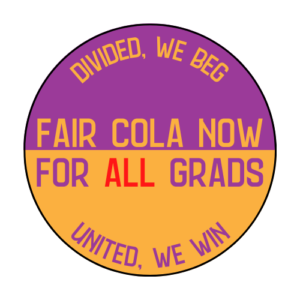 We launched our campaign with 22 member-organizers committed to see it through. Member-organizers developed and distributed buttons and flyers, sent surveys to impacted grads, and held meetings with department heads about the issue and how it impacts their GEs. Within weeks of submitting our intent to take the grievance to arbitration, OSU reached out to us seeking to settle the grievance with our Union. While they refused to admit guilt (as they usually do), they offered grads everything we demanded: full salary adjustments and immediate back pay to all impacted employees. We brought impacted grads back to the union hall a second time to vote on whether or not to accept their offer. After some discussion and agreement on proposed changes to the language, the group again voted unanimously to take the Settlement Offer (signed Settlement Agreement linked here). All impacted folks should see their back pay and newly adjusted salary reflected in their next paycheck.

We achieved our goals for raising the floor for our lowest wage workers. This is thanks to our highly activated and relentlessly committed stewards, member activists, and leaders. We forced OSU to keep its word – something they’re going to have to get used to with an organized and engaged grad union on watch. OSU administration will not be able to bank on exploiting grads simply because we are a transient and overwhelmed workforce on campus. We have our Union, and as long as we’re on guard, OSU will pay their dues to the people who keep this University running. Long live CGE! 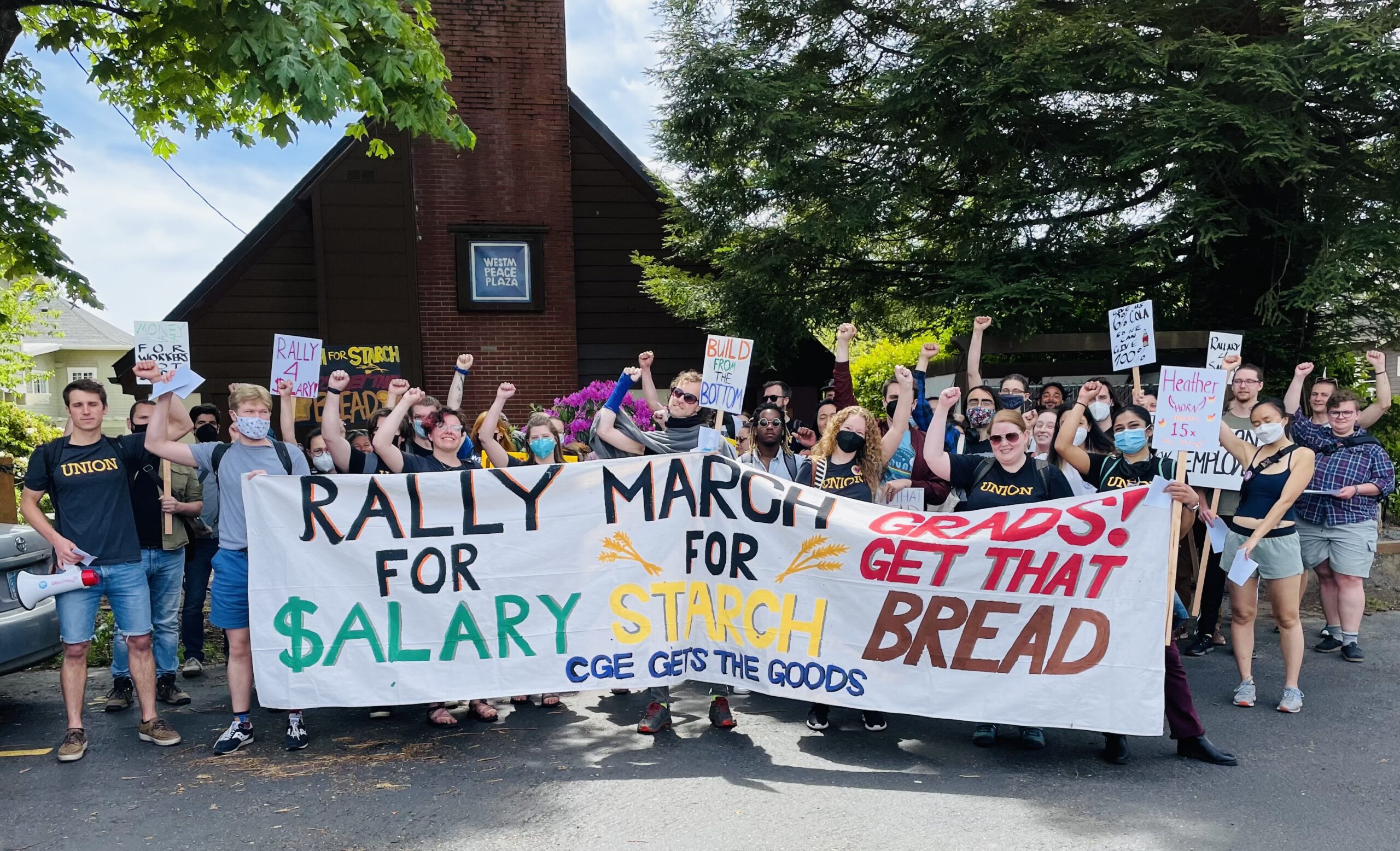