While CGE’s B-Team has spent thousands of collective hours carefully crafting proposals that address the most pressing concerns of Graduate Employees, OSU’s bargaining team seems to have spent collective minutes striking all of our asks and calling that “negotiating”. You’d think that with their collective $1M+ salary, one of them could afford a dictionary.

OSU spent the first three months of bargaining telling us that they could not address all of our concerns until they knew the scope of what we were proposing. We heard them, and so we passed back all of our proposals on April 13th in good faith. How does OSU respond? A “package” deal that looks no different than their initial responses to individual articles – complete strikethrough of language that CGE has been proposing, altering, and reproposing for months.

CGE’s main goals for Article 9 (appointments) are to secure 12-month appointments for all Graduate Employees who want and need them, and accountability measures in the form of fees for when OSU violates this article of our contract.

Graduate Employees barely make enough on their salary to afford their rent and basic needs during the regular 9 months of the academic year. We don’t have the luxury to save money to pay for our livelihoods during the summer in the event we are not employed by the University. This is especially true of International Graduate Employees who are legally prohibited from seeking employment outside of their assistantship with OSU. Rent is not suspended during summer months. Neither is the work/research we do for OSU! We are not asking for OSU to find summer employment for us – we are demanding to be compensated for the work that we already do!

Late appointment letters and work assignments are a high percentage of grievance cases between GEs and OSU. What happens when we grieve these issues? We get our appointment letters and information about our job for the upcoming term(s). Late. Again and again. OSU continuously avoids accountability for the mental and physical stress imposed on GEs who are left in suspense about IF they are employed and what they are expected to be doing. It’s important to note here that the fees that CGE is asking for only apply when our contract is violated! Meanwhile, if we are uncertain about our positions and don’t register for credits on time, OSU has no problem slamming us with late fees and fines or freezing our accounts. Make it make sense.

CGE’s main goals for Article 11 (salary) are to secure a living wage for all graduate employees, a cost of living adjustment (COLA) that will hopefully keep up with inflation, a childcare stipend for GEs who are also parents, and higher FTE minimums for GEs who are instructors of record for their courses.

Since CGE’s last salary proposal, OSU has increased their initial offer by $22/month… It’s important to note that this $22 is for a 1.0FTE, whereas GE’s can only work on a maximum 0.49FTE. That means that OSU is only offering a measly $10.78/month for its lowest-paid workers who are working the maximum possible amount of hours for the University. How generous…

Not only is their proposed salary increase absolutely shameful, but they are also proposing a 3.5% COLA for this upcoming year, and 3% for next year… To put it simply, this is not enough. Inflation is up, rent has been steadily increasing in Corvallis for the last 8+ years, and even OSU is raising undergraduate tuition costs by 13% to keep up with the changing economy. They are offering to charge our students more and pay us even less for the work that we are already expected to do.

On top of offering us an effective pay cut for the next two years, OSU also continues to deny language that would support the children of our hard-working Graduate parents. Our salaries are barely enough for a single person to survive, let alone to maintain proper survival of their children! Even after hearing heartbreaking testimonies from GE parents who struggle to afford their rent and food for their families, OSU has made no concessions to show even an ounce of support. They have taken out all of our proposed language and offered no solutions to the crises that current GE parents are facing.

Do you think all of that is bad? We’re not even done here! CGE has proposed multiple revisions to Article 25 (health and safety) and OSU continues to strike all of it. Not some of it. ALL of it. CGE wrote in four subsections that cover future pathogenic events (because… hello, COVID happened and OSU was wildly unprepared to protect GE’s), climate crises (you’ve seen the news every summer, right? Wildfires, raging, spreading, getting worse), alternative work options (for folks who need accommodations to protect their safety without losing their jobs), and our right to refuse dangerous work. Every carefully crafted word that we wrote was unapologetically struck and dismissed.

This blog is supposed to be about the “package” that OSU proposed we accept for GEs. Let’s summarize what they offered:

Who in their right mind would find this acceptable, agreeable, and fair?

As we said earlier, OSU doesn’t seem to understand the concept of “negotiating”. We don’t make this presumption lightly. Here’s a figure that compares the amount of negotiating CGE has done vs. how OSU has responded. See for yourself! 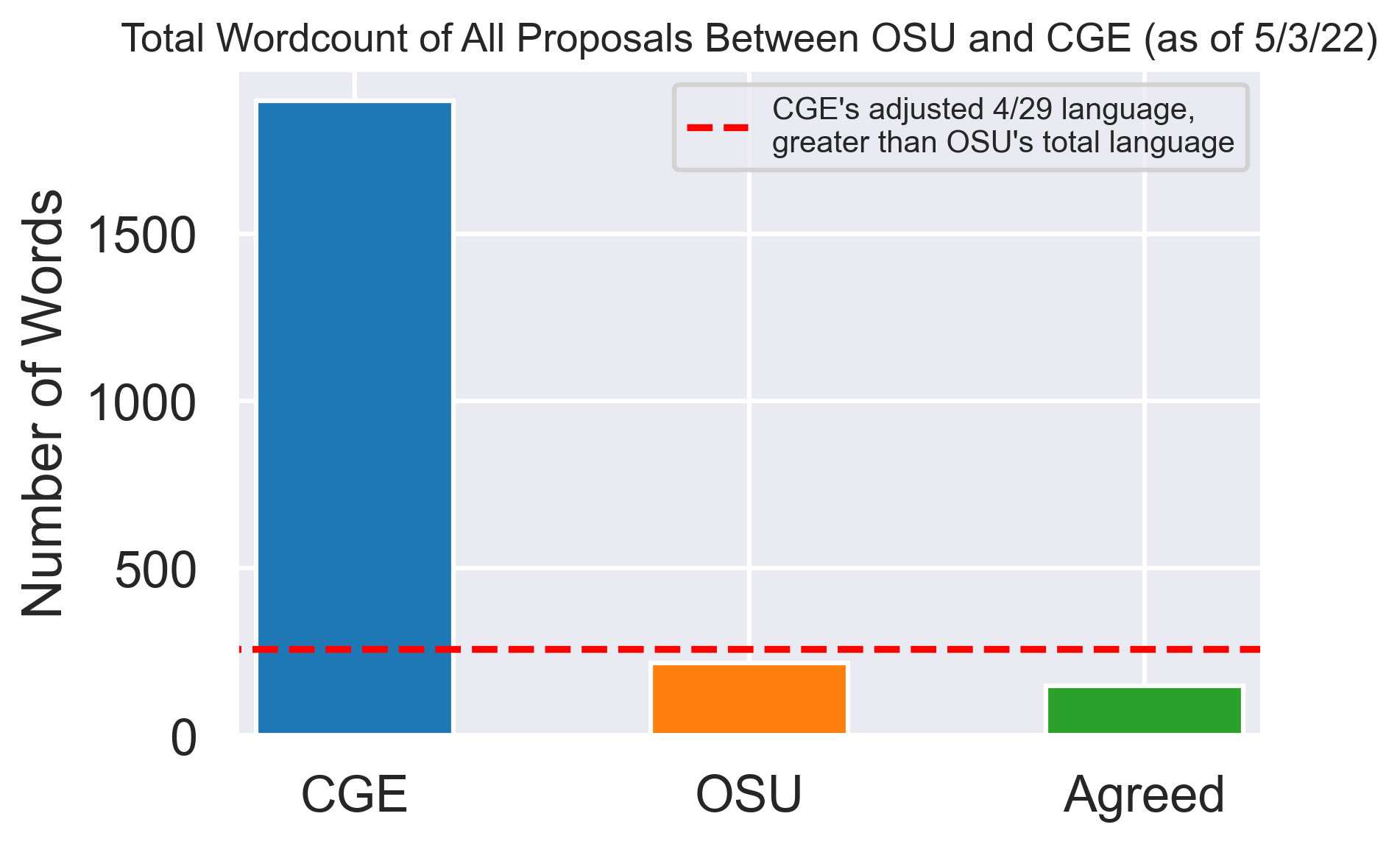 CGE’s Bargaining Team continues to volunteer their time and energy to fight for the wages and protections that we all deserve. Here’s how you can help: