OSU continues to minimize the needs of Graduate Employees by cutting CGE’s proposals to increase our salaries and benefits, while simultaneously abstaining from opening any new articles that (in OSU’s opinion) could “better accommodate” other protective language we have proposed.

Let’s start with salary. The most generous interpretation of the counter-proposal that OSU has put forward would look like a raise of approximately $30 per month for the lowest paid Graduate Employees. This is not only insulting, it’s downright laughable. Instead of providing us with more financial security, OSU is essentially saying “Hey, don’t worry! We’ve got your monthly Netflix subscription covered!” or “Hungry? How about a Jimmy John’s sandwich every week? Will that help?”

In all seriousness, let’s talk about what these financial proposals really look like. Our CGE B-Team is full of math savvy folks. Here’s what we found:

That’s a whopping $1,121,556 that OSU pays to just five of its employees per year, while they are suggesting to split $60,000 between roughly 180 Graduate Employees per year.

Why does all of this matter? Isn’t any raise a good raise? Absolutely not! The “raise” that we are expected to receive in September of 2022 (due to our current COLA) is effectively equivalent to a pay cut when you actually consider the increase of cost of living in Corvallis. On average, rent in Corvallis has gone up at a rate of 6.5% per year since 2014, while our wages have essentially stagnated. 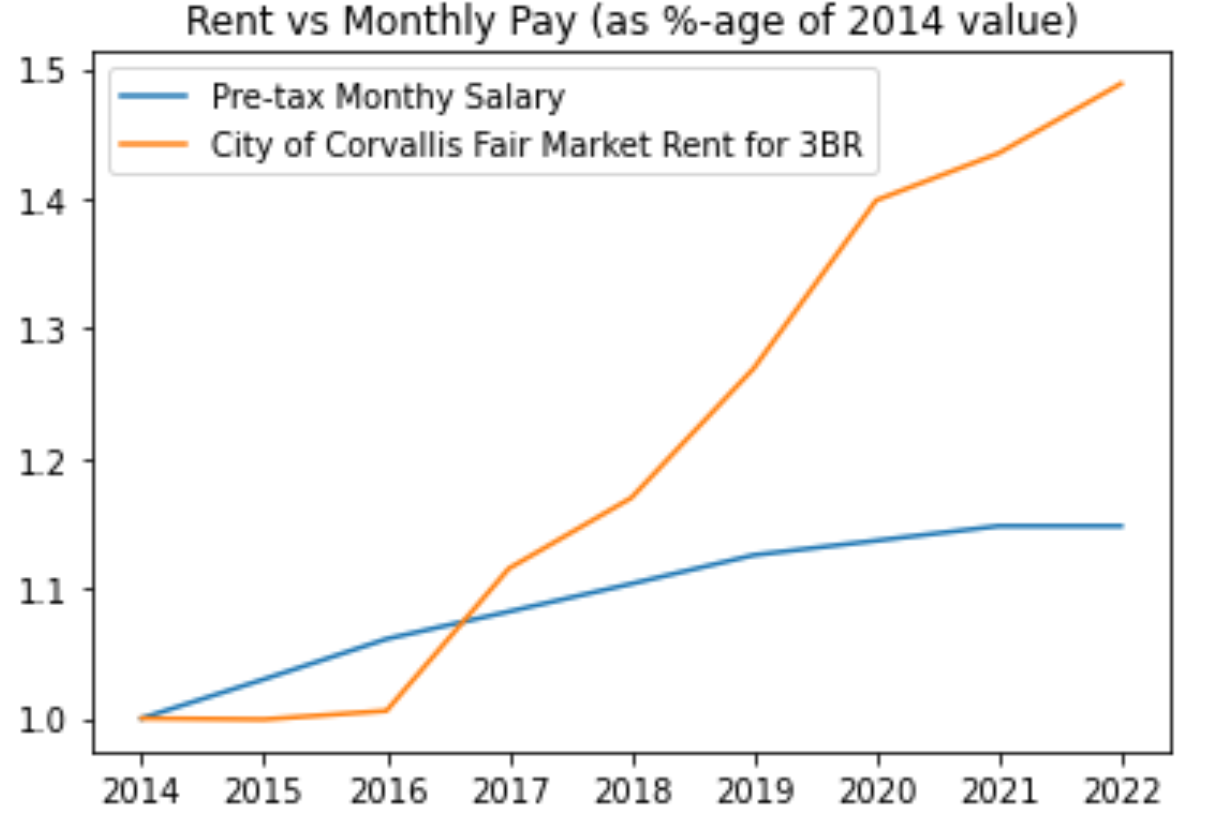 OSU claims that their proposed salary for Graduate Employees is competitive compared to other public institutions, but how can that be when so many of us face rent burden and food insecurity because our pay does not reflect the price to exist here?

What about Graduate Employees who are also parents? CGE has been trying, for years, to negotiate a childcare component into our contract. With our alarmingly low wages, it is unreasonable for OSU to expect Graduate Employees to be able to pay for basic necessities (food, rent) on top of childcare costs. What has OSU done to support the families of its employees?

OSU boasts that they have made substantial forward progress in childcare accommodations recently. Their solution always seems to be something like “renovate this building” or “build this new building” or “tear down this old building”. This costs OSU millions of dollars and forces employees to wait long periods of time before this proposed support is available. Common sense would say that it would be more cost-effective to provide a childcare stipend to its employees to allow those individuals to decide the type and level of care their children need. Since it seems we’re tossing common sense to the wind, let’s look at what current childcare options are at and around OSU. Here’s some data gathered by CGE’s tirelessly working B-Team:

Food for thought: Even without the lengthy waitlists, could you afford these prices on your current monthly salary?

Support CGE in our efforts to secure these things for all Graduate Employees!